When you hear the word Samurai I’m sure the first thing that springs to your mind isn’t anything remotely related to homosexuality, but love between two male samurai was not only widespread throughout Japan’s history but also encouraged. It’s a very controversial topic and few historians have explored it, but there’s more than enough evidence about gay samurai despite very few people wanting to talk about it today. 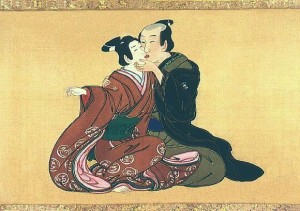 A meeting between a samurai and a kabuki actor.

Nanshoku (literally means “male colors” and shudo (abbreviated from wakashudo — “the way of the young”) are the terms used to refer to male to male sex in ancient Japan, and it was influenced by the same traditions from China. These terms started to appear in ancient literature, but more commonly during the 11th century. As it was the case in many societies only sexual acts were considered being homosexual or heterosexual, and not the persons performing them.

One of the first definitive references to homosexual acts in literary arts is in Genji Monogatari (The Tale of Genji) which was written in the early 11th century. In one scene a woman is rejected by the protagonist who instead sleeps with her brother:

Genji pulled the boy down beside him . . . Genji, for his part, or so one is informed, found the boy more attractive than his chilly sister.

The Tale of Genji is a novel, but there are also several other diaries from the same era that contain references to homosexual acts. Some of them also mention Emperors engaging in homosexual relationships, so nanshoku was definitely widespread throughout the society. Despite their affection for the same sex the Japanese men often married women, however multiple references can be found that sexual intercourse with women was considered more of a “duty” rather than pleasure.

Shudo is a samurai tradition where older and more experienced warriors would have younger apprentices. This practice was encouraged within the samurai class as it was considered useful for teaching virtue and honesty to young boys. The love of women was often devalued as it had a “feminizing” effect. The samurai considered boys 13 to 19 years suitable for love, and often (but not always) when the younger boys came of age they would break off their sexual relationship and continue being close friends.

Shudo relationships were formalized and typically between an older male and a younger boy. The older partner would teach the younger (wakashu) martial arts, warrior etiquette and the samurai code of honor. This relationship was considered mutually beneficial, and both partners were expected to be loyal to each other and assist them in their duties.

Shudo had its early beginnings in the Kamakura period in the 1200s, and reached its peak in 1603. A new era of 250 years of peace started in a unified Japan at that time therefore the importance of the samurai diminished. Many of samurai’s traditions (especially martial arts like judo, kyudo, kendo) started being adopted by the rest of society and nanshoku was gradually becoming increasingly popular outside the samurai class as well, especially with the rise in power and influence of the merchant class who adopted gay practices in the Edo period (1600-1868). During this time traveling kabuki actors often worked as male prostitutes as well.

Shudo as a “way” began to decline in 18th century, but nanshoku as a homosexual act began to flourish. Male love and sex only started seeing a huge decline in Meiji Restoration in 1867 as Japan was forced to open its borders and succumb to western influences, or more specifically Christianity. Such effect can also be observed in other cultures and societies, such as Greece or Rome where homosexual acts were also widely accepted and engaged in.

In conclusion homosexuality was an honored, esteemed and traditional way of life for the samurai warriors for centuries. Their homosexual lifestyle was considered beneficial to young warriors teaching them virtue, honesty and appreciation of beauty, unlike the love for women which was blamed for feminizing men and deemed as a necessity. No matter what your stance about homosexuality is today, you can’t deny that samurai were more engaged in relationships with other men than women — for centuries.

2 thoughts on “A Brief History of Samurai Homosexuality”