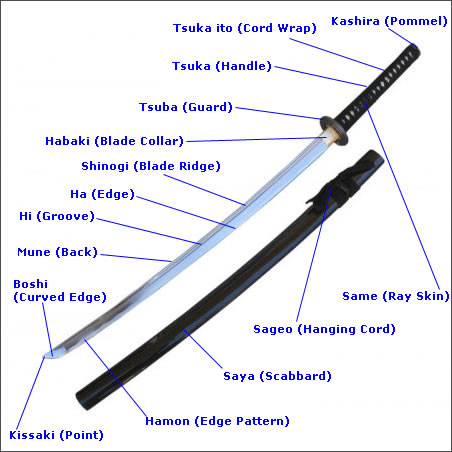 That does it for katana parts. Below you can learn how the parts of the scabbard and and blade are called.

The art of wrapping the sword hilt is called tsukamaki, and it requires a lot of patience, persistence, and attention to details.  For this art, the materials needed are glue, the cloth (ito), paper, and the tsuka. 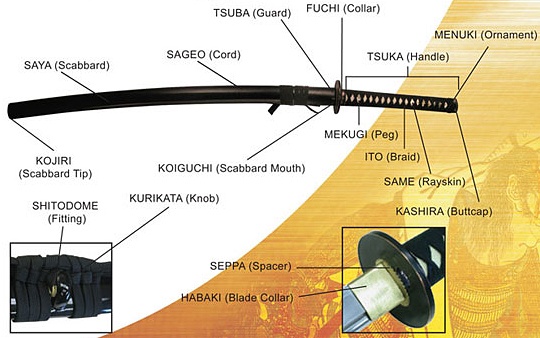 In Japanese, the scabbard for a katana is referred to as saya, and the hand guard piece, often intricately designed as an individual work of art, is called the tsuba. 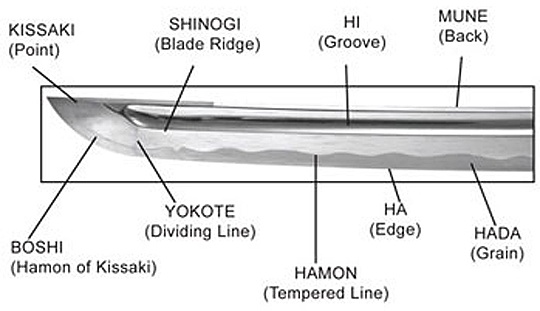 Each blade has a unique profile, mostly dependent on the smith and the construction method. The most prominent is the middle ridge, or shinogi. The shinogi can be placed near the back of the blade for a longer, sharper, and more fragile edge – or a more moderate shinogi near the center of the blade.

The sword also has an exact tip shape, which is considered an extremely important characteristic. The tip can be long (okissaki), medium (chukissaki), short (kokissaki), or even hooked backwards (ikuri-okissaki). In addition, whether the front edge of the tip is more curved (fukura-tsuku) or (relatively) straight (fukura-kareru) is also important.

The kissaki (point) is not a “chisel-like” point, nor is the Western knife interpretation of a “tanto point” found on true Japanese swords. A straight, linearly-sloped point has the advantage of being easy to grind, but it bears only a superficial similarity to traditional Japanese kissaki.

Kissaki have a curved profile, and smooth three-dimensional curvature across their surface towards the edge – though they are bounded by a straight line called the yokote and have crisp definition at all their edges. 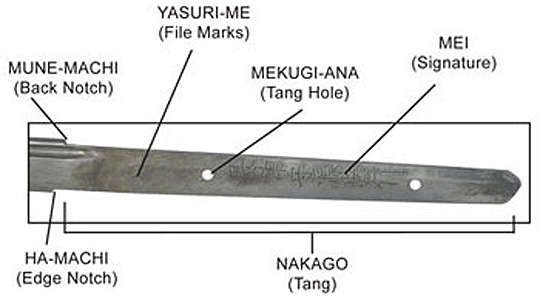 A hole is drilled into the tang (nakago), called a mekugi-ana. It is used to anchor the blade using a mekugi, a small bamboo pin that is inserted into another cavity in the tsuka and through the mekugi-ana, thus restricting the blade from slipping out. To remove the tsuka one removes the mekugi. The sword smith’s signature (mei) is placed on the nakago.

Some marks on the blade are purely aesthetic. Signatures and dedications written in kanji and engravings depicting gods, dragons, or other acceptable beings, called horimono.

Some are more practical. The presence of a “blood groove” or HI (also known as “fuller”) does not actually allow blood to flow more freely from cuts made with the sword. There is no difference in ease of withdrawing a blade from the saya, or a reduction of the sucking sound, which many people believe was the reason for including this feature on commando knives in World War II.

Instead, the purpose is to lighten and strengthen the sword blade. The grooves are consistent in structure to an I beam, lessening the weight of the sword yet keeping structural integrity and strength. The basic design principle is that bending causes more stress in material near the edge or back of the blade than material in the middle, due to leverage. Blood grooves remove material from near this neutral axis, which is closer to the blade’s spine if one edge is sharpened. This yields stiffer blades of a given weight, or lighter blades of a given stiffness.

Furthermore the grooves (always done on both sides of the blade) make a whistling sound when the sword is swung (the tachikaze). If the swordsman hears one whistle when swinging a grooved katana then that means that just one groove is making the whistle. Two whistles means that both the edge of the blade and a groove are making a whistle, and three whistles together (the blade edge and both grooves) would tell the swordsman that his blade is perfectly angled with the direction of the cut.