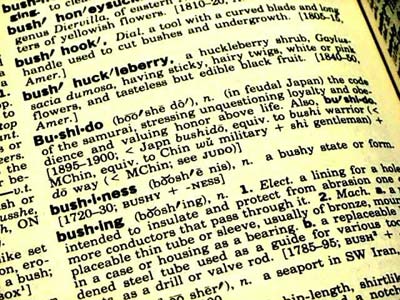 Bushido, literally meaning “the way of the warrior” (bushi =warrior, do = way), is a samurai code of honor, a group of moral principles which the samurai followed and lived by. If a samurai ‘lost’ his honor, he was able to regain it by committing seppuku — suicide.

There are seven virtues of the bushido:

According to some sources, the “Bushido Code” was not written down until 1965, and was based on certain “house codes” of various feudal lords. The samurai had direct influence on the formation of Bushido and its effect on Japan in general, but it was also influenced by several Asian religions: Zen Buddhism, Confucianism and Shintoism.

Recommended reading: The Code of the Samurai: A Modern Translation of the Bushido Shoshinshu of Taira Shigesuke

Code of the Samurai is a four-hundred-year-old explication of the rules and expectations embodied in Bushido, the Japanese way of the warrior. Bushido has played a major role in shaping the behavior of modern Japanese government, corporations, society, and individuals, as well as in shaping the modern martial arts within Japan and internationally. The Japanese original of this book has been one of the primary sources on the tenets of Bushido, a way of thought that remains fascinating to modern world, East and West.

Miyamoto Musashi is a prominent figure in Bushido. He is the author of “The Book of the Five Rings“: his book talks about the the Japanese Way of the Sword and offered the warrior a set of guidelines to follow if they wanted to use the sword properly and remain victorious in battle.

Little is actually known about this influential man, but according to research he killed his first man when he was thirteen years old. For a large portion of his life, he was refining his techniques with the katana. At one point he chose to no longer inflict mortal wounds by not using a real sword. According to legend, he remained undefeated in battle.

Miyamoto Musashi, who lived in Japan in the fifteenth century, was a renowned samurai warrior. He has become a martial arts icon, known not just as an undefeated dueler, but also as a master of battlefield strategy. Kenji Tokitsu turns a critical eye on Musashi’s life and writings, separating fact from fiction, and giving a clear picture of the man behind the myth.

Seppuku is a form of ritual suicide by disembowelment. It is also known as hara-kiri, but that term is considered vulgar. The main point in seppuku was to restore samurai’s honor, usually after they commited a crime (by request), or willingly if they were defeated or disgraced.

It’s interesting to note that even in these modern times there are many suicides each year in Japan, for example often as a result of business bankruptcy and similar. They are rarely committed by swords nowadays, but still it’s hard not to see an impact of a centuries old tradition.

This astonishing book charts the history and practice of ritual samurai suicide from ancient times until the 20th century. The book is divided into four basic sections: “History to 1600” looks at cases of ritual suicide taken from historical texts from the 8th to the 17th century. “The Seppuku Ritual” draws on previously untranslated seppuku manuals from the 18th and 19th centuries to explain the correct procedure and etiquette, as well as the different stomach-cutting procedures, types of swords, attire, location, and even the refreshments served at the seppuku ceremony. “History after 1600” focuses on famed cases up to and including the 20th century, and “Paradigms” offers a selection of short quotations from authors and commentators down the centuries that sum up Japanese and non-Japanese attitudes to seppuku.