If you look hard enough, you’ll likely find dozens of different sword types from all across the world, but none of them compare to the popularity of japanese katana swords: the unique curved design and overall aesthetics and the smithing methods used to make them are breathtaking. They are almost a special form of art, one that is globally recognized.

The uniqueness of the katana sword lies in a variety of technical innovations devised by the Japanese swordsmiths in an effort to resolve the three conflicting practical requirements of a sword: unbreakability, rigidity, and cutting power. Unbreakability implies a soft but tough metal, such as iron, which will not snap with a sudden blow, while rigidity and cutting power are best achieved by the use of hard steel. The Japanese sword smiths have combined all these features in a number of ways which have given their swords a very distinctive character.

The result is a steel which is even harder then the rest of the outer skin and has a razor-sharp edge. A fourth feature, the distinctive curve away from the edge, owes its origin to another practical demand: the need to draw the sword and strike as quickly as possible and in a continuous motion. 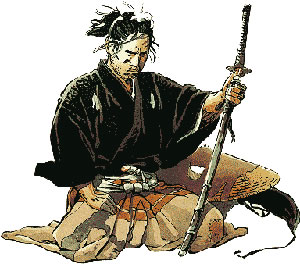 Where the sword itself forms part of the approximate circumference of a circle with its center at the wearer’s right shoulder and its radius the length of his arm, drawing from a narrow scabbard is naturally easier and faster than with a straight weapon. But to the Japanese specialist the beauty of a sword lies in more than just its fulfillment of practical requirements or its almost mechanical perfection of finish and cleanness of profile.

The Japanese swordsmiths have given katana swords a number of features which, although they may have a strictly practical origin, have been elaborated far beyond the simple requirement of hard-wearing efficiency in combat. One example of this is the forging of the outer skin, a process necessary to produce steel of adequate purity and hardness: this has been done in a multitude of different ways so as to obtain a wide variety of distinct grains in the surface of the blade.

But it is the tempering process which has received the most careful attention. The heat-resistant clay is wholly or practically scraped away from the area of the edge in a seemingly inexhaustible range of outlines resulting in an enormous number of patterns of hard crystalline steel which guarantee that no two swords will ever be the same: and yet these outlines have no practical function beyond the simple requirement that the edge must be tempered in one way or another.

The absolutely impressive methods (even when compared to today’s knowledge and technology) used to forge the steel, the sword’s unique design, and the way of life these weapons represent makes them something worthy of our respect.