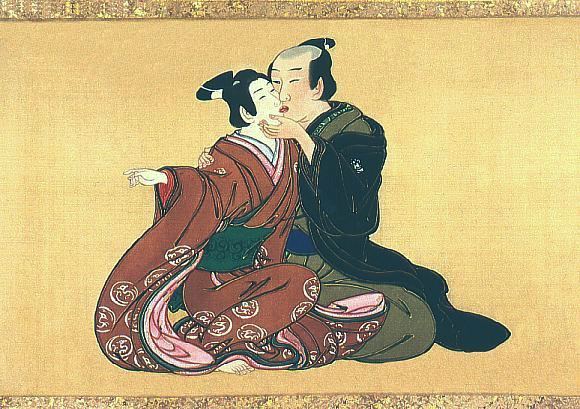 A meeting between a samurai and a kabuki actor.

A meeting between a samurai and a kabuki actor. In the Edo period (1600-1868) kabuki actors often doubled as sex workers off stage. This was especially true of those kabuki actors who played female roles, known as onnagata.) Kagema were male prostitutes who worked at specialist brothels called kagemajaya (kagema tea houses). Both kagema and kabuki actors were much sought after by the sophisticates of the day, who often practised nanshoku, or male love.Miyagawa Isshi, ca. 1750; Panel from a series of ten on a shunga-style painted hand scroll (kakemono-e); sumi, colour and gofun on silk.