Given their noble role in most Hollywood movies, you might be surprised to find the discussion about the Samurai is a somewhat controversial area, particularly as to how the Samurai actually acted.

A historic overview of the Samurai

The feudal period is one of the most interesting periods in Japanese past. Many different aspects of the Japanese culture that are still seen today came out of this era, and one of them are the Samurai. Discovering the role that the Samurai played in the history of Japan is certainly an interesting study.

The Samurai began with the early shogun warriors: trained fighters during the Heian period (8th-12th century) in Japan. These clan warriors were amasses by the emperor Kammu in the late eight to early ninth centuries, and they were skilled in combat while mounted on horses and as archers. Ironically the Imperial court did not regard them highly, despite of what you see in most recent movies. In fact more than often they were seen as barbarians rather than cultured and educated Samurai as often portrayed. Over time as Emperor Kammu’s power diminished, these warriors were disbanded, but soon after new clans emerged and took their place.

Did You Know: The word samurai is derived from the Japanese verb saburau (hence the male name “Saburo”) meaning “to serve”.

In essence this is the era when the samurai really developed. In the late Heian period these warriors began to adopt traditional Japanese styled weapons and armor, and also started following their well-known ethical code of honor known as Bushido. At this point these warriors were known as Saburai (armed retainers) and they often accompanied people as protection against criminals and thieves. After the 1100’s the samurai had to follow “Bun Bu Ryo Do” (loosely translated as “the pen and sword in accord”), and they were considered not only excellent fighters but also cultured and educated warriors. 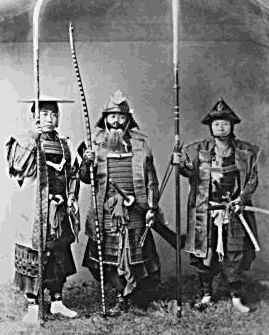 Various Samurai clans continued to grow in power, and besides being employed by nobility and the emperor they often fought against themselves. By the year 1200 they established superiority above the aristocracy and were considered nobility in their own right. For the following 200 years the samurai continued to grow in power and numbers, in which time they also developed what we now know as the “typical” samurai or katana sword.

Samurai clans evolved beyond just swords for hire, and warriors from other classes began infiltrating their ranks. This period of the samurai history is often considered controversial, as many abandoned their Bushido and were engaging in various unethical activities.

By the 1500’s Japan began to open to the western world, which ultimately led to the import of firearms and the deterioration of the samurai culture and way of life. After centuries of fighting with their trusted katana swords, many samurai didn’t want to even consider “dishonoring” themselves by using firearms. For the first time in centuries relative peace was in Japan and the demand for Samurai was lessened. They simply couldn’t adapt and evolve with the time and their own power was ultimately their downfall, as many outside groups did not like their massive influence.

By the 19th century the samurai way of life had nearly ended, with just a few people maintaining the traditional way of life. 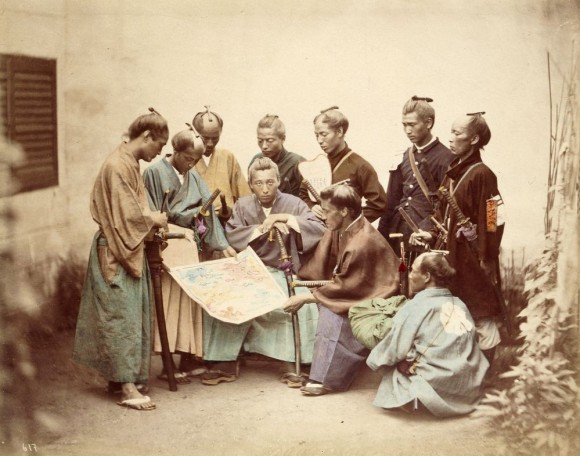 Samurai of the Satsuma clan, during the Boshin War period, circa 1867. Hand-colored Photograph by Felice Beato

Until this period samurai’s were not such an important part and had little influence. They were usually hired by landlords for protection. At the end of the period, two most powerful clans, Taira and Minamoto fought each other in order to take over the country.

In 1192. a new military government was established by Minamoto clan after they defeated Taira. Minamoto Yoritomo became a shogun and ruled Japan.

During this period there were many clans fighting, and the demand for samurai was at its highest. Some samurai were working also on rice fields and farms.

After the clans united, a social caste system was introduced and later completed by Tokugawa Ieyasu, which required samurai to decide whether they want to work on farms, or be warriors working in towns. Only samurai were allowed to wear swords.

Samurai had the most influence in Edo period. They lived in towns and received payment in form of rice. After the defeat of Tokugawa’s last enemy in 1615. relative peace prevailed for almost 250 years, thus samurai’s services were less and less in demand. Most of them became poets, politicians or artists.

In 1852 a fleet of U.S. ships arrived with an ultimatum: either Japan will be forced to open their borders for trade, or else. Considering the power of the fleet and what little Japan had to their disposal at that time, the choice was an easy one. With the opening of the country’s borders and following the massive western influence Japan had modernized in many ways: by building a naval fleet, an army, and sending its citizens to study abroad and more.

In 1873 under the Emperor Meiji the right to wear weapons was given to the newly founded modern army, a privilege that only the samurai had up until then. In late 19th century the samurai class was completely abolished. Their last noted appearance is during the Satsuma Rebellion, which was the last and the most serious armed uprising against the new government. The Last Samurai movie was inspired by the Satsuma Rebellion.

Interesting Fact: even though the samurai way of life has been nearly forgotten by then, it was briefly called up on again during World War II in the form of the (in)famous kamikaze pilots who used to fly their airplanes into enemy ships and planes, basically committing seppuku.