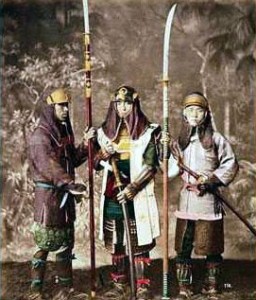 Naginata is a pole weapon extensively used in feudal Japan by foot soldiers, warrior monks, and of course the samurai. In shape it’s similar to the European glaive or halberd or the Chinese Guan Dao. Unlike katana the naginata is not used as a weapon of precision or finesse but rather as a safer way of attacking one’s opponent, and requires considerable skill and stamina. Its length can be anywhere from 150 to 300 centimeters, typically depending on the preference of the wielder.

Although its origins are unclear, traditionally the naginata was used as an infantry weapon mostly for dismounting enemies from horseback, and was especially used during Muromachi period (1336–1573 A.D.). 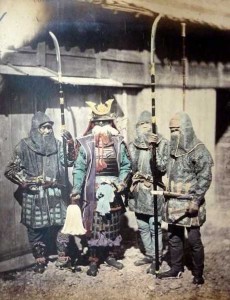 Both the origins and the first appearance of naginata in Japan is unclear, so today we have three main theories:

The earliest clear references to naginata date from 1146 (late Heian period). According to some artwork from 13th and 14th century sohei (warrior monks) are depicted with naginata but no special significance has been added to it, so it could of been only painted as a symbol to distinguish them from other warriors.

In late 12th century during the Gempei War the naginata was very highly regarded due to the increasing cavalry battles, as the weapon was more effective in dismounting and disabling riders than bows and swords. In the article about samurai armor I mentioned how it evolved over the centuries as the needs of the samurai in the battlefield changed: one such introduction to combat the increased usage of naginata were suneate (shin guards or greaves).

In 1543 with the introduction of firearms the use of naginata in battlefields decreased and was replaced by yari (spear). During the Edo period (time of relative peace in feudal Japan) it saw an increased usage among samurai women who were expected to defend their home while their husbands were away: all Japanese women were expected to master fighting with naginata by the age of 18. The length of the weapon enabled women to stay further away from attackers so it’s only logical they used it.

During and after the Meiji Restoration period (1868. – 1912.) the usage of naginata dropped severely and the focus in many martial arts was no longer on self-defense or combat but rather improving oneself both physically and mentally.

Naginata consists of a wooden shaft (nagaye) with a curved blade (nakago) on the end. The blade has a long tang (part which is inside the shaft and not visible), and the visible part is typically 30-60 cm long and forged in the same way as a katana. When not used the blade is covered with a wooden sheath called saya. The oval-shaped wooden shaft (called nagaye or ebu) is 120 to 240 cm in length.

Naginata blade is removable and secured by a wood peg (mekugi) that passes through a hole in both the blade and the shaft. The area of the shaft where the blade sits is reenforced with metal rings or sleeves wrapped with cord.

There are two types of modern naginata construction:

Modern naginata is 210-225 cm in length, and for practicing naginatajutsu it must weigh over 650 grams.

When buying a naginata for practice make sure there are no screws and that the blade is long enough. Many modern imitations are of poor quality and won’t withstand much practice, so I recommend reading the reviews before you go and purchase one. 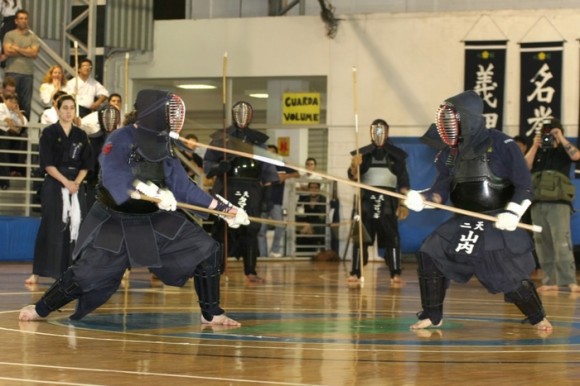 Martial art that involves wielding the naginata is called naginatajutsu. Naginata techniques mostly involve large sweeping motions aimed at developing balance and coordination, and the practice consists of strikes, cuts and thrusts. The emphasis of training is also on form and beauty of movement. Practicing shiai (sparring) develops your strength and endurance, while practicing kata (choreographed forms) aims to improve your dexterity and poise. Kata training when done by skilled practitioners is a sight to behold as it is done in great speed and precision. 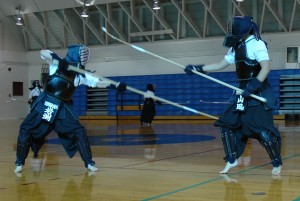 Today most naginata practice is done in the form of a non-competitive sport called atarashii naginata which means “new naginata”. Being a Japanese martial art obviously the emphasis is not only on fighting or physical training but also on mental and moral development of the practitioners.

Tournaments and competitions are also being held in naginatajutsu, in which practitioners typically wear bogu (protective armor similar to the one worn in kendo; usually the only difference are added shin protectors and different gloves) and a naginata which has a bamboo blade. Points are scored for striking opponents into the head, throat, torso, wrists and shins. Obviously steel naginata are never used.

Naginata was a widely used weapon in feudal Japan, particularly among foot soldiers fighting mounted attackers. Today the art of wielding a naginata is still practiced and called naginatajutsu: a modern martial art that doesn’t just aim to improve your physical strength or fighting prowess but also increase mental strength and promote moral values. Practice of choreographed forms and the beauty of movement is also extremely important in naginatajutsu.

You can view a gallery of some naginata/naginatajutsu images we’ve managed to collect below. Credit is given where known.